The ESL One Birmingham DOTA 2 Tournament

ESports are on the rise

ESports is a huge global industry, with estimates that this year the market revenue will surpass $1.1 billion, its a force to be reckoned with. There are even talks to bring esports into the Olympics though still as of the 2024 games there are no plans to include any official events.

There are many, many esports events held globally each year. These can range from local tournaments where anyone can take part, to huge events that can fill arenas. With prize pots for events like DOTA 2’s “The International” hitting over $25.5 million, esports is proving to be a force to be reckoned with, bringing competitive gaming to the mainstream media audience.

But what are these live events like? I got the chance to journey down to the ESL One Birmingham DOTA 2 tournament to see just what has captivated audiences everywhere.

It is showtime! ESL One Birmingham

So I have known about DOTA 2 since its release, but I have never played it. I have dabbled occasionally in League of Legends, but MOBAs never seem to keep my attention for any period of time. So the thought of going to watch a tournament was a bit daunting. Was I going to understand what was going on? Would I be that odd person in the crowd sticking out like a sore thumb?

On my early morning train journey and my stroll through Birmingham city centre, I could easily pick out the other people headed over to the arena for ESL One. This came in real handy as I have literally no sense of direction and even following Google Maps I briefly got lost and ended up walking in a big circle. Luckily I found a group of people I could stealthily follow and made my way over to the entrance to pick up my badge.

ESL One, tensions start to mount

I arrived not long after doors open on the Saturday morning and walking into an empty arena I did think to myself, “Is this place really going to get full?” I found myself a great seat really close to the stage and watched the pre-show, more and more people filing in and taking their seats. 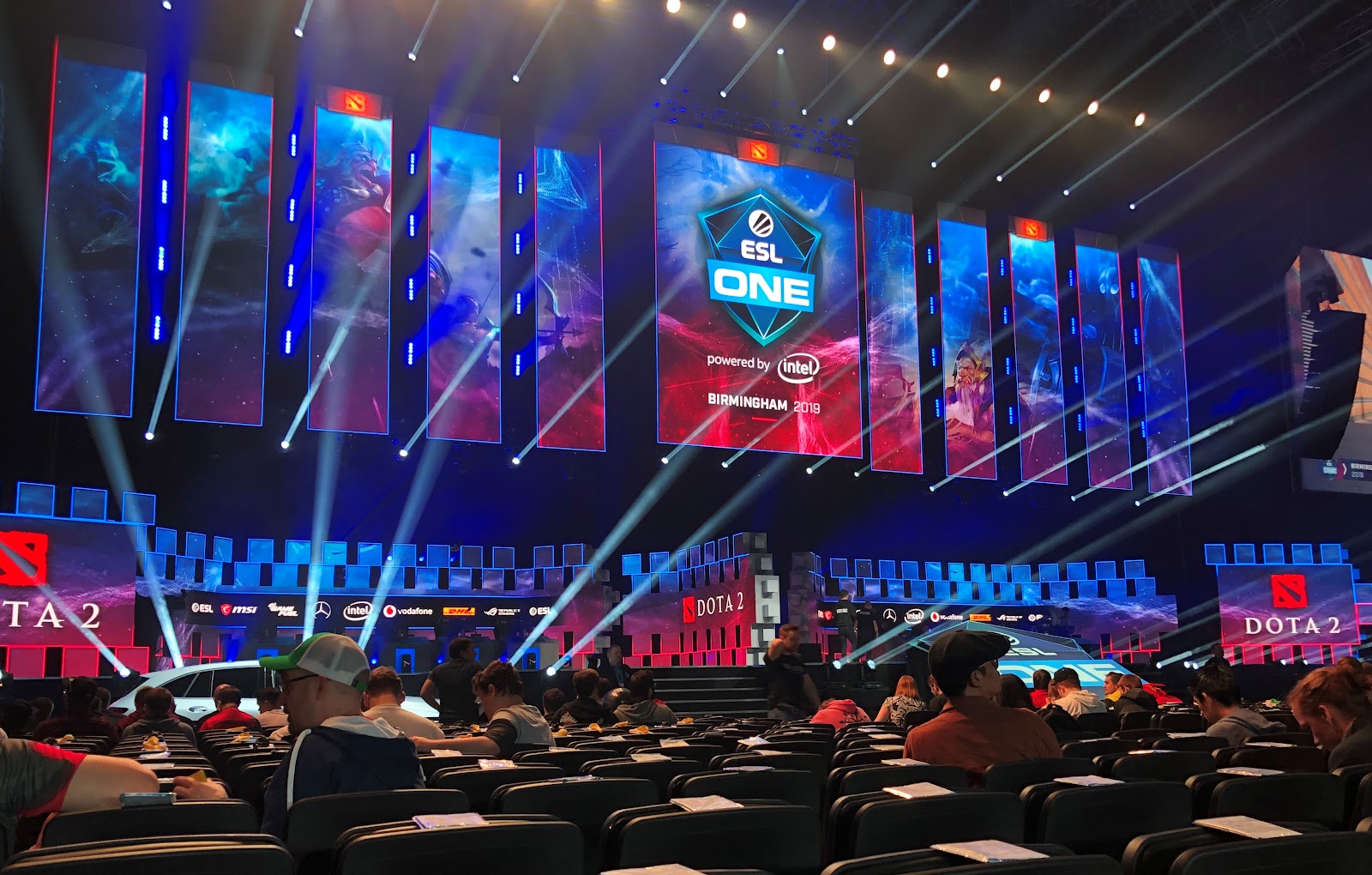 As the arena filled up, the lights got darker, the music got louder and the air was heavy with anticipation. The countdown hit zero and the crowd were in an uproar. With hundreds of people with thunder sticks and foam hands shouting encouragement for their team of choice, it was hard not to get swept up in the excitement of it all. 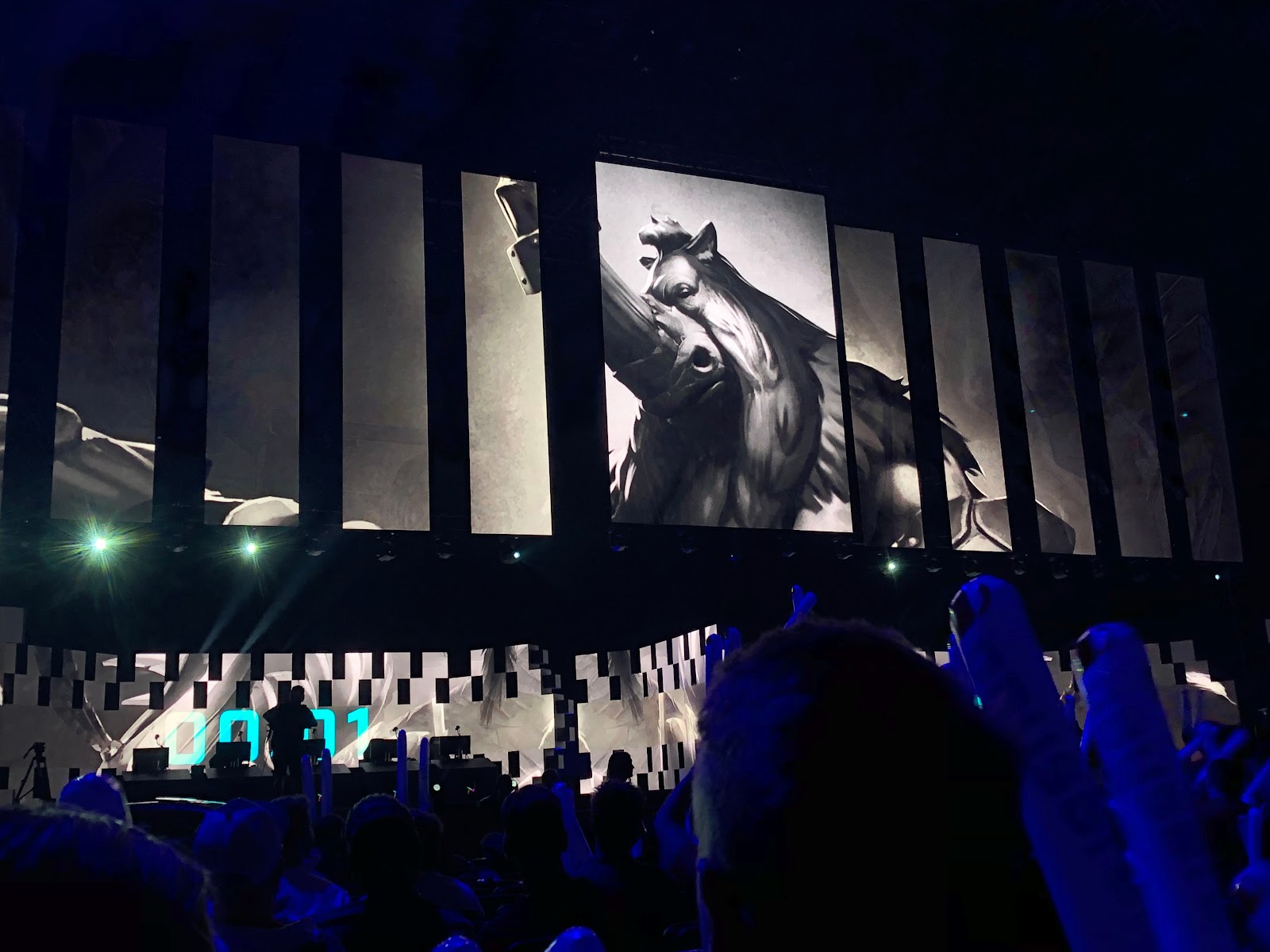 Not being a DOTA player it was quite difficult to follow who was controlling which hero. Most of the tactics discussed by the casters bypassed me, but it did get easier to follow as the day went on. It even got to the stage where I was really invested in Team Secret (And what is even better is that they went on to win the tournament). Something about them as a team just grabbed me, and I was on the edge of my seat during a couple of their matches when it was hard to tell which way it was going to go.

You can appreciate how much money ESL as a company is worth just looking at the production value of the tournament.

ESL One Birmingham- the venue

They picked their venue really well. Arena Birmingham is in the centre of the city, with great transport links and lots of alternative refreshment choices close around. (We all know how extortionate food can be in arenas!) Navigating around the Arena was quite easy and there were some bonus Tech Exhibitors giving away freebies, free sticker hype! With great provisions made for full accessibility throughout the venue, there wasn’t really anything you could complain about. Venue aside, the stage set up was fantastic. No expense was spared with huge screens, one for each member of the team, showing their hero, with live interaction when they died or respawned. This made things easier to follow for everyone seated throughout the arena. 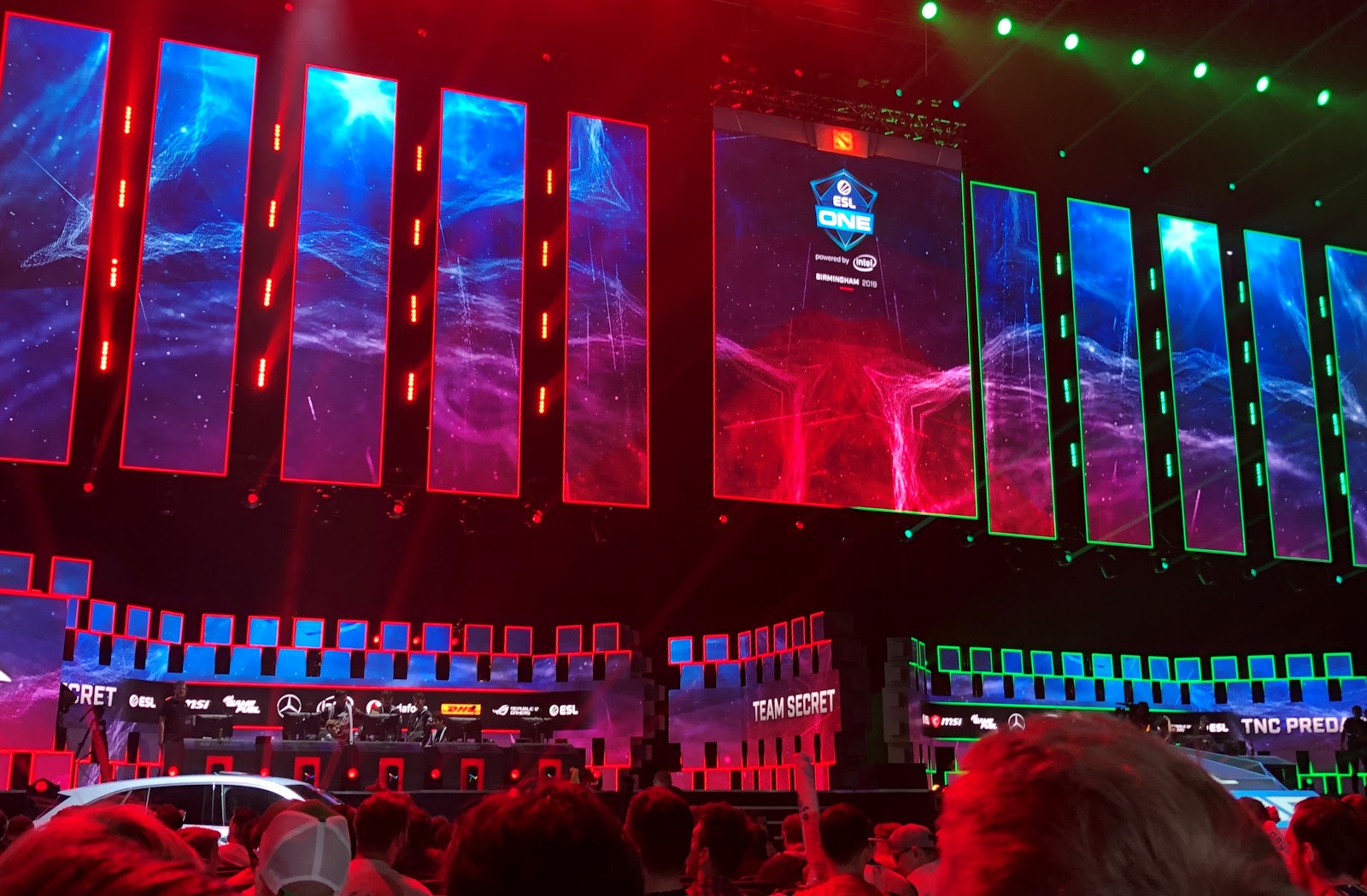 The added bonus of going on the Saturday was the Cosplay competition, with a top prize of just over £1000 those entering, meant business. The costumes were astounding, anyone able to pay that much attention to detail and then recreate it, deserves a lot of respect. The judges themselves all agreed that it was incredibly difficult to pick a winner and everyone who made it to the top ten were all winners to me. (See the winner RehabGNaked’s “Crystal Maiden” here.)

I think one of my highlights, as strange as it sounds, was watching a huge group of adults playing with balloons during the breaks. When you’ve got a few beers down you it appears that batting balloons around a crowd is tireless fun. And I do have to say I did get sucked in for a while, but my arms did begin to ache. 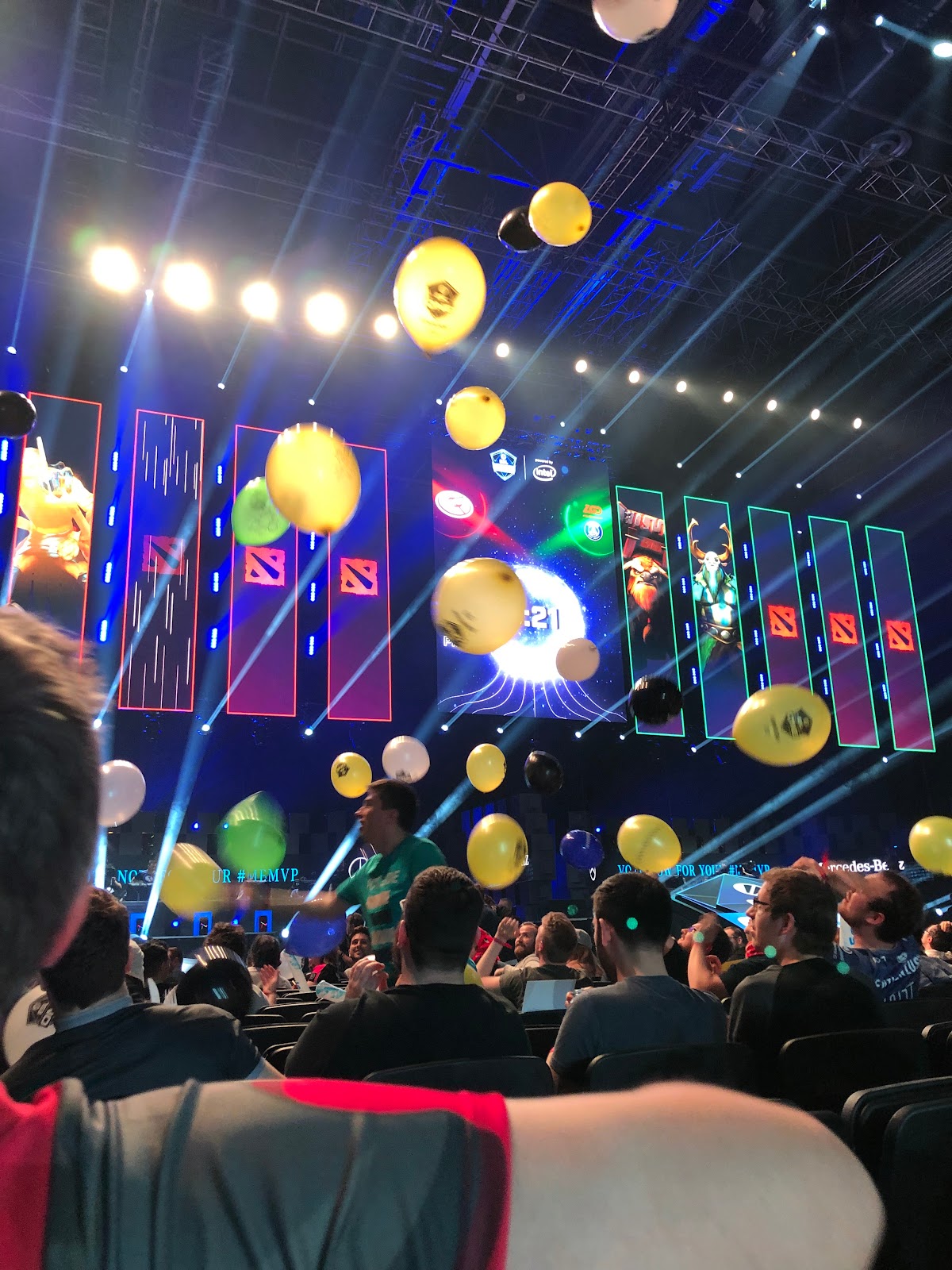 I had a fantastic day, whilst the whole experience didn’t convert me to wanting to play DOTA it did turn me into a tournament fan. The atmosphere is addictive, there is little to differentiate it from any other sports tournament in the sense of excitement, the drama and the tension flying around the arena. The only big difference was the jerseys the fans were wearing! Bring on the next round! 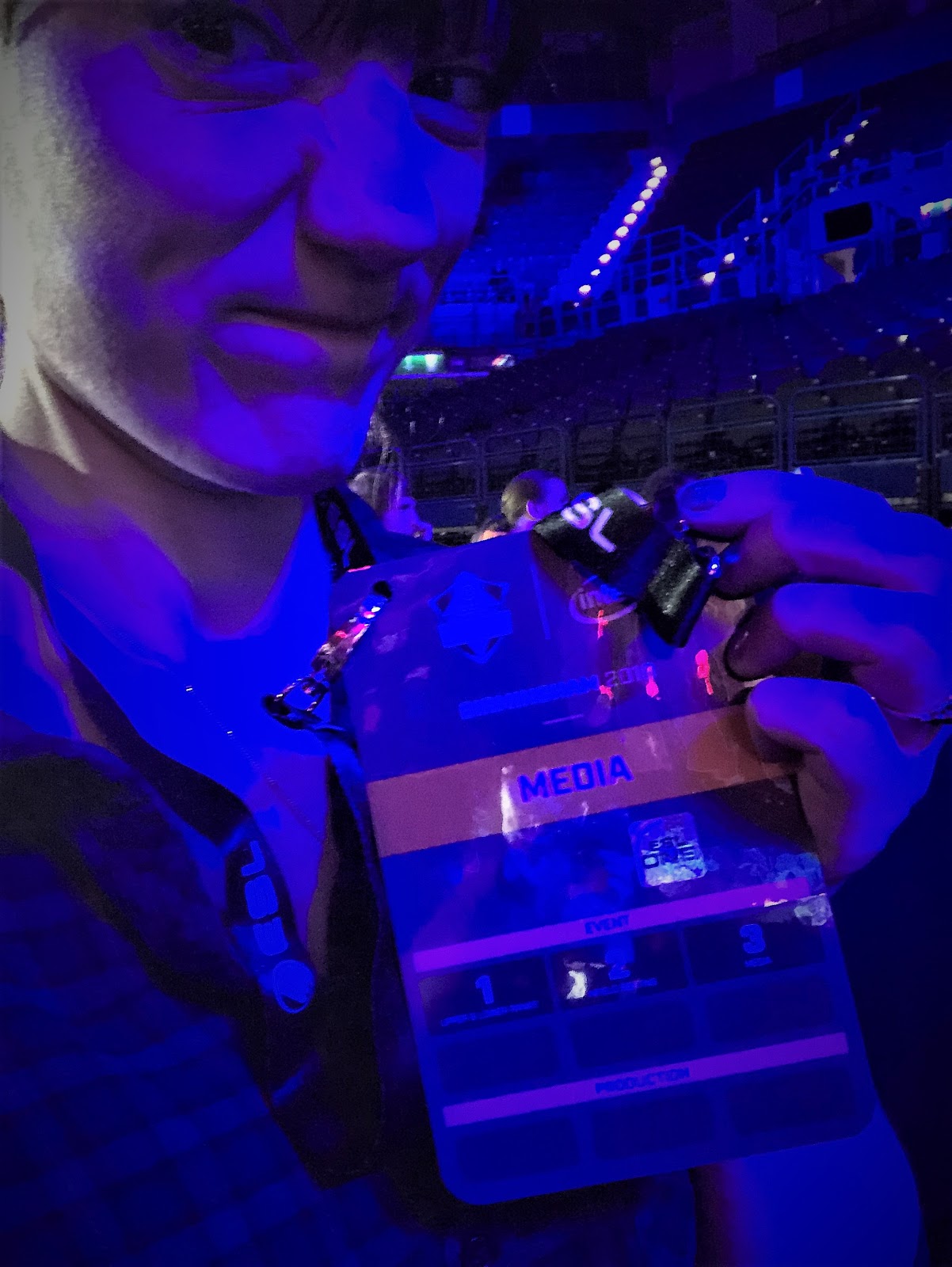 I just want to end on a big thank you to the press team over at ESL UK for making the whole weekend possible, a big shout out to the whole team for the background organisation and for making the whole day swift and easy, from badge collection to the daily press guide updates. Your hard work paid off! GG guys.