Coming of Age and Releasing the Beast – Female Sexuality in Horror

Written by Kim Morrison as part of the Valkyries Horror Festival focused on Women in horror.

Horror movies are no stranger to the theme of female sexuality. The idea of the virginal ‘final girl’ having an almost superpower-like ability to defeat the killer in the final act has been featured, and made fun of, in more horror films than you can shake a stick at. However, that doesn’t mean that the representations of female sexuality that we get are positive. In fact, most of them are told from the male perspective. These horn-dog teenage boys desperately try and persuade their girlfriends to have sex with them.

That’s not to say there are no positive representations of female sexuality in the genre. In recent years we’ve been lucky enough to have several films which deal with the trials and tribulations of coming of age as a woman. But with a little extra horror thrown in for good measure. Because let’s face it, puberty and everything that comes with it is terrifying, a bit gross, and usually involves more than a little blood. Therefore, using horror movies to tell these stories makes perfect sense.

In Raw, life-long vegetarian Justine (Garance Marillier) has just started veterinary school. She is dealing with a number of pressures including living up to her family’s legacy and surviving rush week. When Justine is forced to eat raw rabbit kidney, she starts displaying strange behaviours. Her need to eat meat, and eventually, human flesh, grows. Starting university has thrown Justine into a very different world. It’s one that’s full of boys and very sexually-active schoolmates. Justine is struggling to keep up in many aspects of her life. Her growing need to feed quickly becomes linked with her sexual appetite. After biting open a boy’s lip as they kiss, Justine ends up having sex with her roommate, Adrien (Rabah Nait Oufella). However she has to sink her teeth into her own arm to prevent her devouring him. 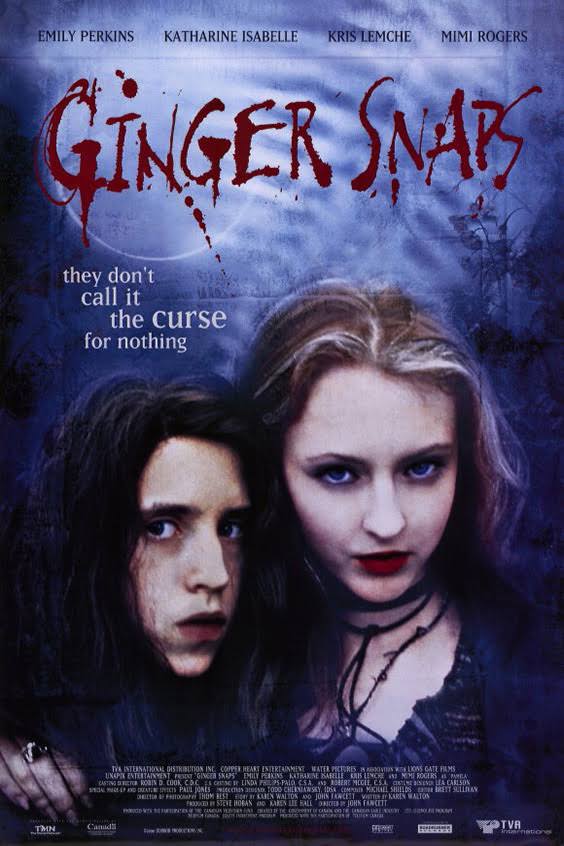 In Ginger Snaps, Ginger (Katherine Isabelle) has a similar reaction when she’s bitten by a werewolf on the night she gets her first period. 28 days elapse between the next full moon and her next period. Ginger starts to change, including experiencing cravings she’s not used to. “I get this ache… And I thought it was for sex, but it’s to tear everything to fucking pieces,” Ginger tells her sister, Brigitte (Emily Perkins).

Both Raw and Ginger Snaps show the confusion that young women can feel. Especially when they’re presented with this swirl of emotions and hormones that puberty. Or simply discovering your sexuality can bring. Justine and Ginger are discovering this side of themselves for the first time. The girls feeling quite alone and unsure of what’s happening to them, try to hide it as much as possible.

A distinct lack of education

Because the truth is, teenage female sexuality is not something that is as openly spoken about as that of our male counterparts. In high school, sex education classes usually focus on male pleasure. While simply informing girls on how to avoid getting pregnant. Sex is painted as something which happens to women, as opposed to something we actively participate in. While Raw and Ginger Snaps uses cannibalism for a more literal representation of the need for flesh, it shows how confusing and isolating it can be when women aren’t armed with the knowledge they need to take on this stage of their life.

Teeth is another example of a monstrous side taking over as Dawn (Jess Weixler) finds herself hitting sexual maturity. While she’s not developing a taste for human flesh, she is learning to control the teeth in her vagina. Whilst also dealing with her conflicting feelings around losing her virginity and breaking her oath of celibacy. Dawn doesn’t have a good understanding of how her body works, and the types of desires that are completely normal for teenage girls to have. In Teeth the school has decided to block out the close-up picture of a vulva in the biology textbook. However, the penis is left uncensored. Dawn’s vagina is literally a mystery to her. Even without the inclusion of teeth, those around her seem to be actively blocking her ability to explore her sexuality.

While having teeth in your vagina may seem like a problem. They actually allow Dawn to become more comfortable with herself and her sexual desires. Her teeth only spring into action when she is assaulted or doesn’t feel comfortable. For example, when she finds out Ryan (Ashley Springer) is only sleeping with her as part of a bet. Her extra set of teeth help her see that while her sexuality is something she was once scared off, and actively tried to ignore, it is actually incredibly powerful. The teeth also show her that no-one around her is going to help her. She needs to start exploring her body herself so she can become comfortable with who she is.

Overall, the use of releasing the literal beast in horror movies to represent female sexuality is an incredibly powerful one. While there are the added monstrous elements of being in a horror film. It’s an excellent way to represent the changing bodies, emotions, desires, and needs that young women experience as they move into adulthood.

Thank you to Kim for her piece “Coming of Age and Releasing the Beast – Female Sexuality in Horror”.  You can check out more of her work here and here.