I played Hellblade: Senu’s Sacrifice from start to finish and it took 6 1/2 hours, this is what I learnt

Hellblade: Senu’s Sacrifice is a thing of beauty. Straight up everything is absolutely beautiful, the mo-cap, the CGI, the sound, the storytelling AND JUST EVERYTHING is amazing. Can you tell I loved it?

Something I had not realised about Hellbade was how deeply it was steeped in Norse Mythology, and I love Norse Mythology )as if you couldn’t tell), so I was absolutely THRILLED to discover we were off the Hellheim and we were going to battle Surtr, God of fire and Valravn, God of mischief. These fits are fantastic. In fact, one of the most satisfying and interesting parts of the game for me was the combat. As well as the combat, the character designs are fantastic, human in physique but distorted enough to enhance the hellish vibe we were experiencing.

Senu, pronounced Senua; is a young warrior, an outcast, a daughter, a loved one and alienated from her tribe. She is alienated by her farther because Senua experiences 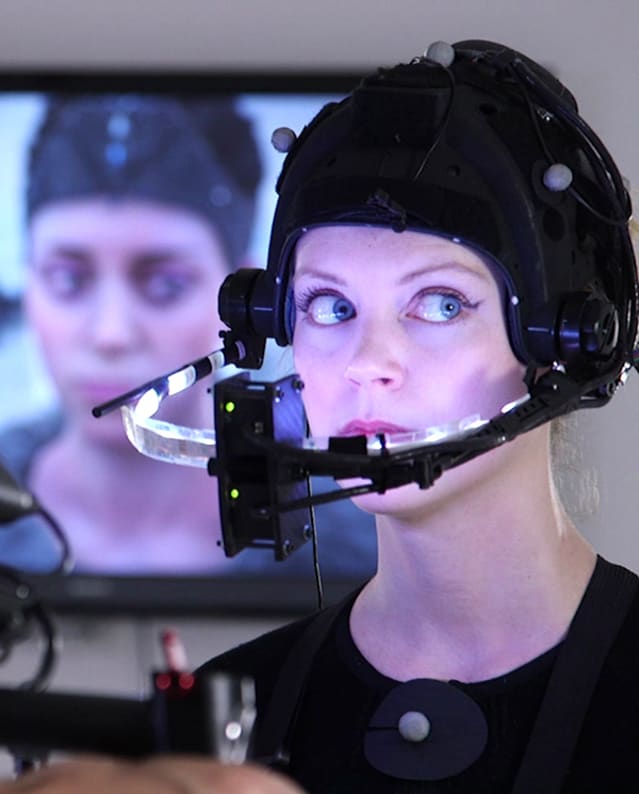 frequent hallucinations and delusions, all symptoms of psychosis. She meets a warrior, Dillion who she forms a bond with and they fall in love, her symptoms start to ease thanks to the love and care from Dillion.

He is the one who convinces her to take the warrior trials to become a warrior. Senu is push to the brink when she find Dillion sacrificed to the Norse Gods by Viking invaders. This is when she sets off on her journey to Hel to try to bargain for his soul.

Her psychosis is with her every step of this journey, whispering awful things in her ear, making her doubt herself, trying to trick her and trying to make her fail.

Eventually, Senu reaches the end of her quest and the game ends or begins, depending on how you look at it.

Senu, is brought to life by Melina Juergens, not only did she do the mocap but she got to enjoy having that rig in her face whilst it captured her likeness to create her digital double, Senu. The performance, in my opinion, is pretty damn oscar worthy. Nina Theory pushed the bounds of their motion capture whilst creating Hellblade and made something incredible.

So the combat, you only fight when you have too. When the large warriors descend on you, that is when you draw your sword. The game is more focused on exploration, puzzle-solving then constant fights. However, when you do have to battle it feels in keeping with the narrative. There are a few different types of enemies and you must alter your attacks accordingly, you use a variety of heavy and light attacks, block, parry and dodges. These, similar to the Batman games are all about timings, you can gain the upper hand in a fight after a successful dodge and parry than just barrelling in. There is a certain finesse you must apply to the battles. Take a deep breath and concentrate, they are tricky but they can be overcome.

The audio in Hellblade: Senu’s Sacrifice

When loading up Hellblade: Senu’s Sacrifice, you are advised to play the game using headphones as the game uses binaural audio, (Binaural recording is a method of recording sound that uses two microphones, arranged with the intent to create a 3-D stereo sound sensation for the listener of actually being in the room with the performers or instruments.) Which in this case, is terrifying and ramps up the emersion to 11.

The binaural audio really shines in the opening sequence of the game. Senu has left the village and she is travelling alone on a little boat floating down the river. The voices begin to whisper that she is making a mistake, that she will fail, that this is her fault and she should turn back before it is too late. This first experience of this type of sound design, especially through headphones, is disconcerting, to say the least. It feels like these voices are everywhere like they’re behind you, whispering into your ear.

So what did I learn in these 6 1/2 hours, well I loved the game. it is well crafted and ahead of its station. Some of the representation for MH and psychosis is not always quite on the right track HOWEVER, it does bring light to a topic often kept in the dark, or represented in really poor ways.

I learnt that I would do anything to give Senu a nicer life and that my butt goes number after sitting for about 4 hours or so!