A Review By Malissa White

Colors and Editing by: José Villarrubia

Lettering and Design by: Jeff Powell

This is the time for social horror. In the wake of horror masters Jordan Peele and Ari Aster, in films like A Girl Walks Home Alone At Night and Goodnight, Mommy, we are unpacking complicated truths about ourselves and the society we live in. Through it, we’re learning that we are more terrifying than ghosts.

Ari Aster’s exploration of ancestral trauma really shines in Hereditary. Jordan Peele’s Us asks us to examine everything from our own shadow selves (via the Tethered) to the violence at the heart of socio-political ignorance. Goodnight Mommy, an Austrian horror masterpiece by Veronika Franz and Severen Fiala, questions our recognition of our mother as our own. A Girl Walks Home Alone At Night by Ana Lily Amirpour balances predator and prey, purity and corruption, freedom and loneliness, male opportunity and feminine power against the black and white Bad City.

Horror as a vehicle

Horror’s role is to force us to confront these uncomfortable truths about ourselves, about our world, and face the demons lurking behind them. Not just the fear of ghosts, serial killers, social sins (such as the frankly sexist ‘final girl’ narrative), or fear of women’s sexual agency (as in Raw, Under the Skin or, arguably, Teeth). Instead, social horror examines larger, more personal monsters our communities create. There is no cure, no neat prescription or end, but instead an uneasy acknowledgement of the horror, the resolution of which is in the hands of the audience.

Furthering the genre is Pornsak Pichetschote and Aaron Campbell’s Infidel, an elegantly drawn and utterly terrifying ghost story on xenophobia, bigotry and otherness. Set in an apartment complex still reeling from an explosion triggered by a Muslim neighbour with so-called ‘terrorist’ ties, Aisha, a Pakistan-American woman, struggles against an entity hellbent on destroying her relationship with Leslie, her boyfriend’s grandmother, and Kris, her boyfriend’s daughter. After a fatal fall puts Aisha in a mysterious coma, neighbour Ethan, an Asian-American writer, and Medina, her black-Muslim best friend, work to take down the entity plaguing only minority residents.

While on the surface, Infidel seems a straight forward tale of xenophobia, it reveals the complexity of these issues and the role of fear in exacerbating them. Campbell’s ghost is a twisted, gnawing form, chewing at the afflicted characters, riding the backs of others. Its face is often seen seeping through the floorboard, walls and mirrors of apartments. It is spurred on by rising suspicion about Aisha’s place in the building. What I find most compelling is to whom the entity reveals itself and how it manifests among the characters. It should come as no surprise that the ones most committed to fighting the entity are those worst affected by it.

Below the surface of Infidel

Aisha first doubts the entity’s validity, insisting that all is well in the building and with her family. It’s no stretch. Given the overt themes in the series, to connect these experiences to microaggressions: contained instances of indirect racism easy to dismiss as figments of imagination, ignorance, or over-sensitivity.

When Grace recalls the events of the explosion, she refers to the suspected bomber as “Arab.” This prompts the appearance of the entity and the reaction of Aisha to the entity. Ethan sees it too in the same instance. Later, after overhearing an uncomfortable exchange between Leslie and Kris on Aisha’s muslim beliefs, Aisha encounters the entity more violently. These instances allow readers to acknowledge the ghost as a reinforcement of these microaggressions.

When tensions in the building increase following Aisha’s suspected involvement in Leslie’s fall, experiences of the entity intensify. Strengthened by the tension, Medina experiences the entity in a confrontation with a neighbour, Haley. Who accuses Aisha of pushing Leslie to her death. In the confrontation, Haley reveals her own bigotry toward Muslims as Aisha reveals her own heritage. Her relationship with Aisha, who Haley refers to as “the Arab.” Haley defends herself by explaining that she previously gave the bomber the benefit of the doubt.

In a gorgeous double page spread at the centre. The suspected bomber lies shot dead, Campbell draws visual connection and separation between the events as powerful visual metaphor. There, Grace reveals that she also believes Aisha is a murderer. She justifies her prejudice using the suspected bomber’s Muslim heritage. Despite the fact that he was on a walk and reportedly surprised by the explosion.  She excused his reclusiveness as “cultural,” imploring Ethan and Reynolds to acknowledge that, she would think that same had he been white. We are consistently presented with another strange and reclusive neighbour who is white, but who carries none of the suspicions. Grace, an Asian-American woman, does not see the entity. She feeds it. 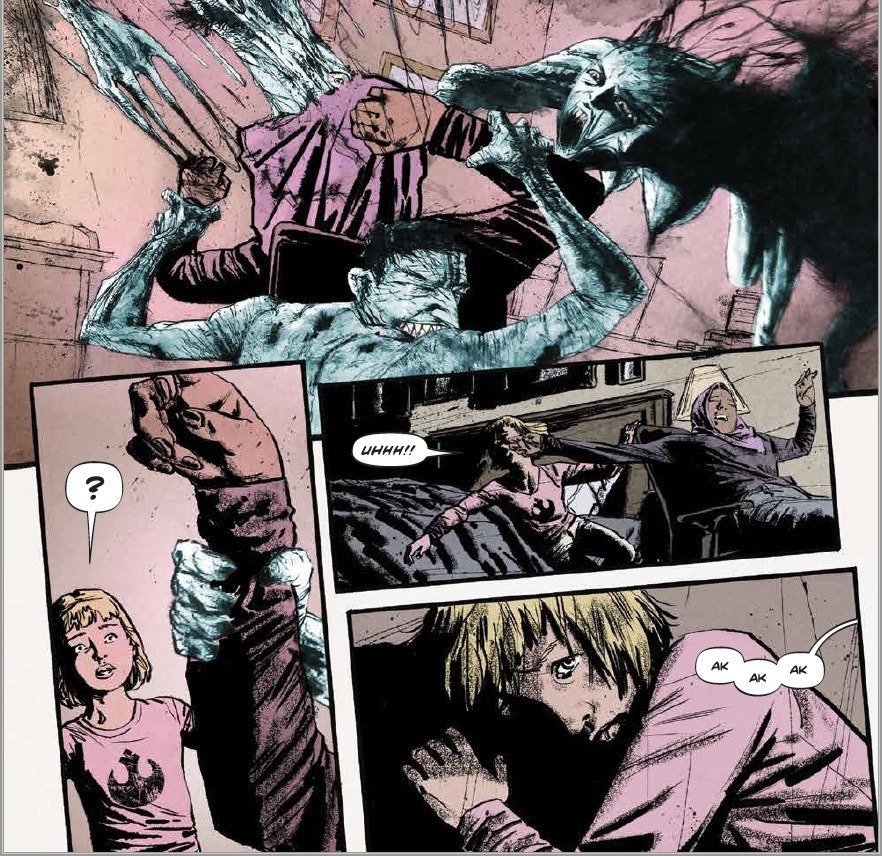 Through Infidel, Pornsak highlights the internalisation of such bigotry in the case of Grace, and the complexity of racism as seen in Ethan’s discussion with Reynolds on what qualifies as prejudice when a woman only dates white men. In one flashback, white residents refer to Korean neighbours as racist for using “black thug”, when referring to a job candidate but decry affirmative action. Pornsak avoids offering an explanation. He instead presents these instances as evidence of this community’s ignorance that bigotry masquerades as a concern.

Despite best efforts, Medina, Ethan and Aisha cannot successfully dispel the entity, merely survive it, in one form or another. Even after Medina’s name is cleared, after Aisha recovers and returns to her mother’s home. The entity appears behind the building’s new developer. Infidel ends with a simple, horrifying conclusion: the entity isn’t tethered to the building itself, but its inhabitants.

Works like Infidel unsettle us from our relative position as a passive viewer, to active participant. Stories arising from this brand of social horror come from the perspective of marginalized groups. Who were previously flat out ignored. Whose culture is haphazardly villainized, or sacrificed to save or educate the white protagonist in traditional horror. The reason is clear and equally upsetting: these are horrors we face every day.

A brilliant and relevant comic. Pichetshote and Campbell position themselves among social horror masters in their presentation of society’s ignorance of the impact of xenophobia on marginalized trauma.

In social horror, as in Infidel, the true villain is us.

We are honoured to have a guest post from the wonderful Malissa White, she is the genius behind Nightmare. She is an incredible force for good in the comics world and a delight. Thank you again Malissa.

As always we hope you enjoy, if you would like to support the site you can join our Patreon here: https://www.patreon.com/thevalkyries

Want more from the Valks? You can listen to our podcast over on Spotify| Tunein| Stitcher| Google Podcasts| Apple Podcasts|Anchor FM