I’m one of those people who loves to theme my reading around the latest film/TV show releases. So if a book is getting adapted, I’ll read it on the days leading up to the films release, so I can immediately compare the original to it’s adaptation. It usually ends badly.

But, with Marvel films, I do something a little different. I read every single comic I have to hand featuring that specific character. I binged Captain Marvel comics before Captain Marvel, binged Doctor Strange before his film, and went absolute nuts on everything I could find on every character ever in the lead up to Endgame. So, with the release of X-Men Dark Phoenix this month, I must have some great X-Men recommendations, right? I sure do!

Here are some of my absolute favourite X-Men comics for you to get yourself in the mood for mutants:

My God, I’m rereading this entire series at the moment, and it is absolutely incredible! This comic follows the story of Scarlet Witch, and the aftermath of her getting rid of nearly all of the mutants in the world, with just three words – ‘no more mutants”. Watching it all unfold, how the world changes when the mutants are at first empowered, then hunted to near extinction is fascinating. And, I mean, I’ll never say no to reading more about Magneto’s children, they’re some of my absolute favourite mutants!

An immediate follow up to House Of M, which follows the X-Men exclusively as they deal with their dwindling numbers, trying to come to terms with their extinction. Until a baby is born. A baby is born possessing their powers, instead of them manifesting in their teenage years. What follows is a race against time to get hold of the child before anti-mutant Purifiers kill her.

The follow up to Messiah War, which follows on from Messiah Complex, this one is filled with beautiful art, and really rounds up a lot of the House Of M storyline. I loved seeing Cable in this one, and his relationship to his father, Scott, and how Scott takes on the responsibility of leading the X-Men. Just watch out for the character deaths in this one, they were not pretty in the slightest… 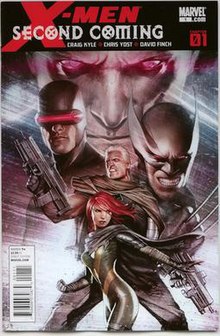 Phoenix Resurrection: The strongest of the X-Men has returned by

Moving on from the entire House Of M story line entirely, Phoenix Resurrection deals with Jean, and what happens when Phoenix tries to take her over again. I wasn’t the biggest fan of the actual Dark Phoenix Saga comic, but I really enjoyed this semi-offshoot. I’ve never been a fan of Jean’s character, to be honest, but in reading this, it made me with want to cry with joy that she was back. The artwork was stunning throughout, and the sense of hope it left me with is something I will never forget.

Now, if I’m talking about my favourite X-Men characters, I have to mention Legion, the Omega level mutant offspring of Charles Xavier. I only read this to know more about the character before watching the first season of the Fox TV show Legion, and yet I couldn’t stop myself falling absolutely in love with David. He’s a complete outcast in the mutant community, because of his mutant abilities and his unstable mental state, and yet he is constantly trying to do his best for everyone. Watching him finally gain some level of control over his powers was a fantastic sequence in this story, and I’m so excited to finally continue this series in a couple of weeks, in time for the final season of the (admittedly, completely and utterly different to the comic counterpart) show!

Oh my God, did I love this comic! It’s the most adorable thing I’ve ever read! Featuring Skottie’s unique artwork, this follows the literal baby versions of the X-Men and Avengers as they basically fight each other in the playground. It sounds weird and stupid, but it’s genuinely funny and absolutely adorable. I want to re-read this book constantly, and hang up basically every panel on my bedroom walls. If you’re looking for a lighthearted time, definitely read this, I cannot get it out of my head.

All New Wolverine, Vol. 1, The Four Sisters: Time for a new OG X-Men?

Following another major X-Men character offspring, this follows Laura Kinney, AKA X23, as she tries to deal with becoming The Wolverine in the aftermath of her father’s death. I read this simply because I wanted to know more about her character after watching Logan, and I loved reading this. We got a good look into Laura’s mind, and see what the lab behind her creation is doing with her DNA. I loved it. That scene she has with Doctor Strange, where she talks about keeping Logan’s legacy alive? I cried. Seriously, I cried.

This series has so many mixed reviews, and so many hit and miss issues, but this one has always been my favourite. Featuring our lovable merc with a mouth, Deadpool who teams up with Spider-Man for the most random of adventures. Featuring a trip to Hollywood, where they name drop Ryan Reynolds (because of course, you do that in a Deadpool comic) and rip into Batman vs. Superman, this is a fun off-shoot of the current Spider-Man/Deadpool run. There’s no plot, and it adds nothing to the main storyline, but it’s a damn good time!

And that’s currently everything I can think of! I’ve got a few more comics I want to get to, like Universe X, Day Of The Atom, and Onslaught, but these are currently my absolute favourites – and we need to save something for a follow-up, right?