Until Dawn came out WAY BACK in 2015, I know its been a while. But, god damnit I just love it. So much that I have even gone back numerous times and worked through it painstakingly to get the full list of trophies! It was frustrating and cathartic in equal measure I can tell you!

But, what is it about Until Dawn that keeps me invested?

That is a great question and, one I have asked myself many times. Is it the twisting turning narrative? The immense CGI? The wonderfully creepy adventure? Or is it, just because it features Wendigos? We’ll never know.

No, we will its all those things! So let’s have a gander at them in more detail.

The Narrative- What the heck happens at dawn?

We begin on a dark and cold night, snow is falling, there is an eerie stillness on the mountain. Except for the shining lights of a log cabin belonging to the Washington family, where a group of friends including Josh, Beth and Hannah Washington, are getting drunk and being generally awful humans. After being tricked and humiliated by the group (see all awful people) Hannah runs from the cabin only pursued by her twin Beth. Disaster strikes as the twins fall down an old mine shaft..

We join the gang then one year later, on the anniversary of the twins’ disappearance. The gang are back on the mountain at the invitation of the still grieving Josh. We meet each of the 8 members of the group and get a chance to control them as they make their way up the mountain. When they discovered they are trapped and seemingly not alone, things quickly turn sinister.

Couple that fear of being trapped on an isolated mountain, with a creepy old mine, an abandoned hospital and something skittering round the walls that used to feast on humans. Well, you can see why you are going to be in for a terrific time!

You are asked to make decisions for the characters that change the way they interact with one another and their attitudes towards each other. It also may impact whether they survive Until Dawn. Some characters you will be happy to bid farewell to *cough* JESS *cough* and others you will be frustrated to loose.

Now, it is possible to keep every playable character alive! But, I won’t go into the specifics on how, there are 100s of amazing guides you can follow to get the best outcome!

Now, some of the decisions can be frustrating as is par for the course with these kind of adventures. However, mostly they seem pretty fair and it ACTUALLY has an effect. Unlike games like Fallout 4 where your four options are four different ways of saying yes, you can be a total dick!

Something that features in Until Dawn and similarly in Man of Medan, is the intermissions with the psychiatrist. In which he asks you  series of “this or that” questions which will also impact the game play and change the visuals slightly. Another way, that Until Dawn works to create a somewhat unique experience for each different players.

Something that made Until Dawn really stand out for me are the striking visuals. The face mapping and mo cap for the characters is disconcertingly lifelike. Arguably it is a little dated now and they have certainly perfected the techniques with their recent releases Spider-Man and Man of Medan. However, loading that up four years ago? I was STUNNED.

The combination of the mo cap and voice overs just works so well, the casting is also well curated 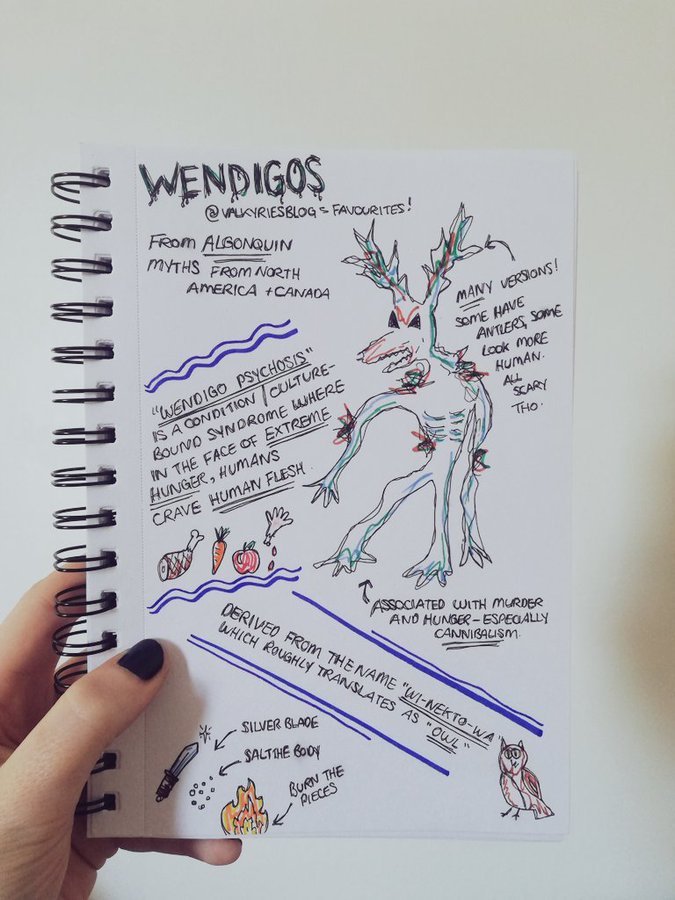 I mean, no one is surprised that this is a chapter are they? I love folk lore, myths, folk tales and any sort of tale from the past that was passed down from generation to generation. My absolute all time favourite folk lore creature is the Wendigo.

The Wendigo comes from Algonquian Native American folklore, and the exact details vary depending on who you ask. It is mainly believed that the Wendigo’s origin started as a hunter, who when lost in a nasty winter storm resulted to cannibalism to survive. However, he soon hungered for more human flesh and became more beast then man.

Some versions have the Wendigo only walking the earth certain lunar patterns similar to that of werewolves, though there is no transformation back to normality here. Some tales have the Wendigo as a 15 ft beast with claws, antlers and huge owl like eyes and others still resemble human-esque figures, but with blood thirsty expressions and often elongated limbs. The latter is what we are treated too in Until Dawn and its wonderfully gross!

They skitter and move in a way that sets my teeth on edge, Georgie our editor, can attest that I can watch pretty much anything, but not long limbs skittering and lurking about. I don’t know what it is about it, but god it gets me in the spooky bone every time.

Could you last Until Dawn?

So there you have it, I was meaning for this to be like 500 words on how fun it is, but instead we did a semi deep dive! So enjoy, I hope you have played Until Dawn and if not then you really should cause its the spookiest of all months and, when better then now to get stuck in?

Did you love it? Let us know in the comments below!

Don’t forget you still have time to bag yourself pins and patches. These are the exclusive Kickstarter price! Check them out over on: https://www.kickstarter.com/projects/thevalkyries/the-valkyries-pins-and-patches